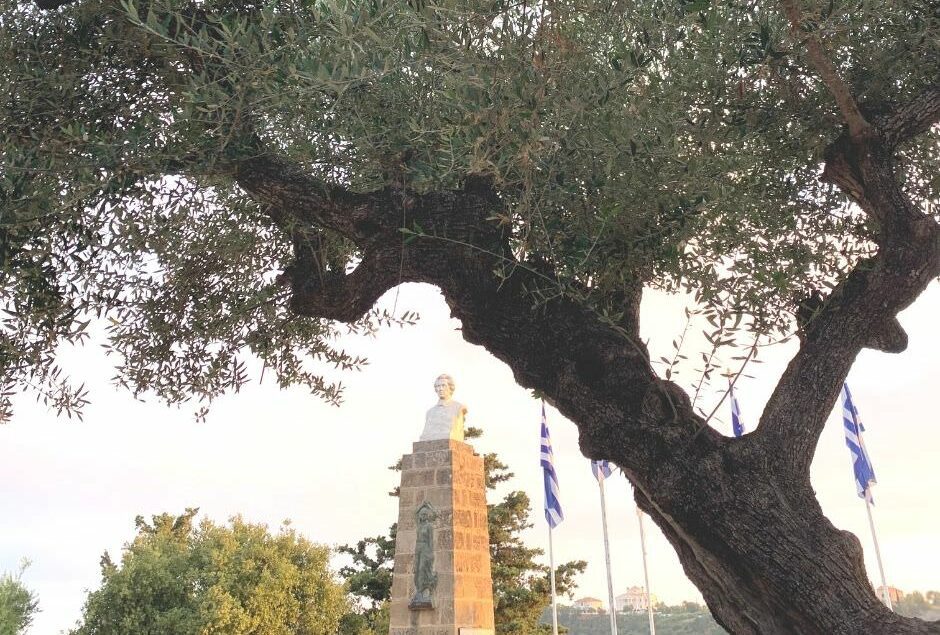 Dionysios Solomos was born in Zakynthos in 1798. In 1809 he was sent to Italy to study and
graduated from Pavia University in 1817. During this time he wrote his first poems in Italian.
He returned to Zakynthos in 1818 and got to know other people interested in literature. The
only collection of poems he had published during his lifetime were the poems in had written
in Italy.
His most important work was the poem he wrote – “The Hymn to Liberty” which are the
words to the Greek National Anthem . He was inspired to write this whilst at Stranis Hill in
Zakynthos, listening to the sounds of the battle raging on the Greek mainland in
Messolonghi during the Greek Revolution in 1821. He finished the poem in 1823. It was
published in 1824 and set to music by a friend of Solomos. In 1864 it was established as the
Greek National Anthem and is the longest anthem in the world at 153 stanzas.
He later moved to the island of Corfu following a family dispute where he lived until his
death in 9 of February 1857. During his time in Corfu he also started another very famous
poem – “The Free Besieged”, which was again inspired by the struggles endured during the
Greek revolution, especially the final siege at Messolonghi in 1825-26. This poem was never
completed.
After his death Dionysios Solomos was widely mourned throughout the Ionian Islands. His
remains were returned to Zakynthos in 1865 where he found his final resting place.
He is considered the national poet of Greece, not only because he wrote the words to the
national anthem but also due to his considerable contribution to Greek literature and
poetry.
An excerpt from the poem “The Hymn to Liberty”

We knew thee of old,
Oh, divinely restored,
By the lights of thine eyes,
And the light of thy Sword,

From the graves of our slain,
Shall thy valour prevail.
As we greet thee again-
Hail, Liberty! Hail!

[The Hellenic National Anthem,
translated in English by Rudyard Kipling in  1918]