Throughout the whole island you can find churches and monasteries some dating back to the 15th Century. The Greek Orthodox churches are quite plain on the outside, but the interiors are adorned by icons, gold, murals and many other ornate artifacts.

Some of the most well-known are: Agios Dionysios (St Dennis) Church in Zakynthos Town is the most famous in Zakynthos, especially as it was one of the only churches to have survived the earthquake in 1953. Erected in 1948, the church holds a large collection of icons representing the saint’s life, including his silver coffin which houses his mummified remains. The bell tower is modelled on that of San Marco in Venice and is a tribute to the Venetian architectural legacy on the island.

The Monastery of Panagia Anafonitria is in the village of Anafonitria, which was named after the monastery. The monastery dates back to the 15th Century and was built during the Venetian occupation of the island. It was where St Dionysios (St Dennis), the patron saint of the island, lived for the final years of his life. It is made up of several buildings, the entrance is through an archway with an imposing tower which was built for defensive purposes, the church is located in the centre and also there are the living quarters of the monks.  There are many ancient artefacts located here including frescoes from the 15th century. There are no monks living there now, but the parish priest and the island’s residents take care of the monastery.

The Monastery of Agios Giorgos of Krimnon (St George of Kremnon) is located in the region of Volimes and is sited on a hillside with fantastic views over the famous Shipwreck Beach and the Ionian Sea.  It was built in the 16th Century and was home to a number of renowned ecclesiastical men including St Gerasimos, who is the patron saint of Kefalonia.  The original monastery suffered a lot of damage by pirates, but has been restored in recent years.  There is a stone watch tower located here which was built as a defensive measure against the pirate attacks. There are still two monks in residence there.

Every village has its own church, named after a saint. There are celebrations once a year in honour of the saint when the whole village gathers together with music, dancing, food and drink.  Everyone is welcome, so if you ever get the chance to attend it is worth it to experience the atmosphere and see how the Greeks 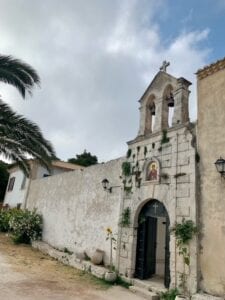 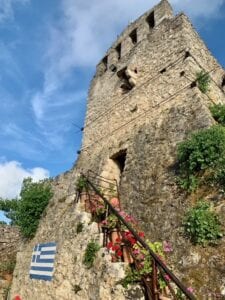 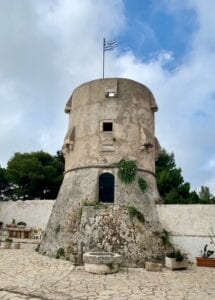